House in Bandon with energy bills of €15 per month

Built in Old Chapel, Bandon, this is a House constructed to rigorous standards

THERE’S an irony in the modest siting and demeanor of a just-built new home, constructed to rigorous passive home standards in Cork’s Old Chapel, on the outskirts of Bandon, in a prosperous setting which was busy back 200 years ago for its cotton mills, among other hives of industry and mill activity. 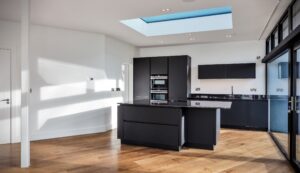 This 2021-completed home was quite precisely set on its rural site just within the town’s catchment to get views of a centuries’ old mill building remains, part of the Overton estate and Allman family’s milling dynasty which employed thousands, standing, near-skeletal, high on a hill a few fields away from this one-off, which in contrast was set most deliberately so as not to shout out its own presence.

The mill’s remains, set on a crest of the hill, catch the eye from the kitchen, living, and dining areas of this single-storey, contemporary build, under its low-profile zinc roof, a contemporary construction which is best really only appreciated from the air, by birds, or drones.

It’s low slung and angular in its floor plan, not-quite star-shaped, measures 164 sq m or 1,750 sq ft and is inserted into its sloping site, on the edge of wood-fringed fields of pasture, next to a mid-20th century family home which yielded up this plot for another generation of family, returning to live in Bandon.

It’s not just the house’s low profile that intrigues and, that’s only once you get up the entrance drive, because, from the road, there’s nought to be seen. Not a hint of it, really, bar entrance gates, and a wending drive. 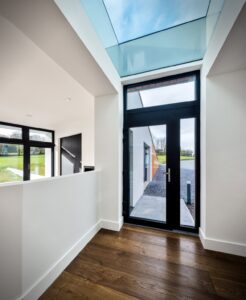 Then even when you get up close, it gives little away as to what exactly is inside. It’s distinguished (or, rather, indistinguished?) by a main façade of four wide sections of Siberian larch, with four vertical white rendered divides, holding drainpipes, and with a discrete entrance door next to a garage, which is itself bunkered or built under an earth-sheltered sloping roof, rising ramp-like from the just-surfaced drive.

What’s going on? What is it?

It’s a different take on the passive house design, that’s what, and it’s a brave melding of bungalow/single storey home (generally not the most efficient way of laying out a house for energy conservation, rooms are better stacked one floor atop another to reduce roof area and potential heat loss) with precise design and construction standards met.

In this case, and thanks in part to the last year of pandemic disruptions, construction just wrapped up late 2020 after a c 18-month on-site process, done with aplomb by builder Chris O’Donovan Construction Ltd,

The key to getting accreditation is, of course, avoiding thermal bridging and airtightness, so huge attention had to be paid to things like taping and sealing (harder in a masonry build than in timber, but timber framing can be a marginally higher cost). It eventually came in with an airtightness level of 0.635 ACH at 50Pa, but that was only after a small panic over some air loss after some of the higher-set window openings were adapted to take remote-controlled actuators or motors to open.

These actuators lock differently, locking in at one point rather than at three points, allowing for minute but noticeable air tightness degradation.

Also a challenge was the design of the five glazed roof lights set into the zinc clad roofs: The Architect got around that by having triple glazed panels flush to the roof/ceilings, and then topping the frame or upstand above (where sealing can be an issue) with another single glazed pane. It was important, he adds, that the roof light was sealed on the top of the upstand on a very dry day, to avoid trapping in any moisture or condensation.

Notable too as part of this home’s design is the overhang on the main living area roofs, with the floor-to-ceiling glazing set back on the southern aspect to avoid overheating from the sun in summer when it’s high in the sky, and there’s also some lateral shading from projecting sidewalls thanks to the cranked or angled plan. (If you are living in an old, cold traditional Irish build and would relish the thought of any ‘overheating’ at any time, look away now: the estimated energy bills for space heating and cooling here are €15 per month…that’s €180 pa, about one third the cost of an oil tank fill, and that’s for a home of up to four bedrooms (or, three with end-of-wing home office,) with master bedrooms en suite and two others share a bathroom in a Jack and Jill arrangement.

The 1,725 sq ft here include those four east-facing bedrooms all off a linear corridor, brightened by the regular punctuations of light from above in three or four of those roof lights, and there’s another over the kitchen island and its dark units next to a big utility/comms room, with largely open-plan combined kitchen/dining/living room in angled spaces and views up to the old mill that serves as a location pin for this low-slung new kid on the block. 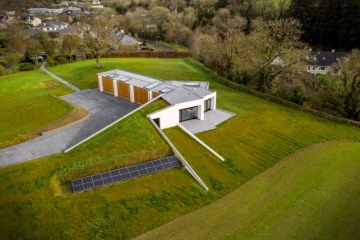 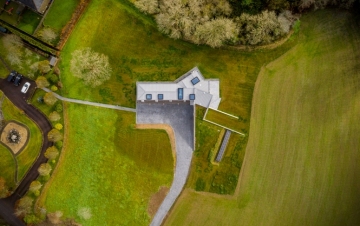 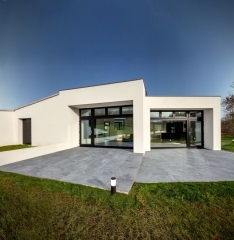 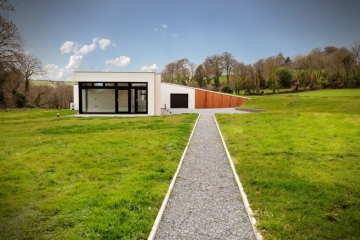 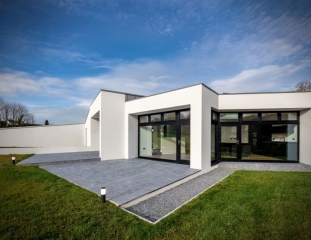 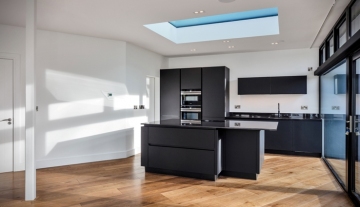 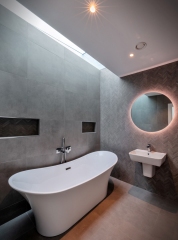 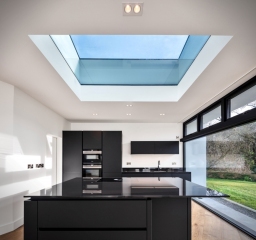 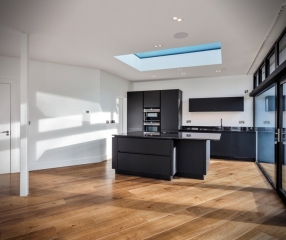 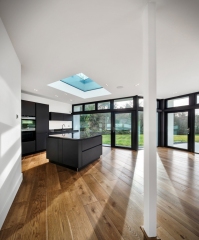 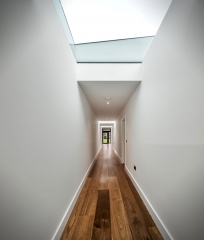 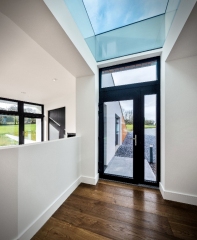 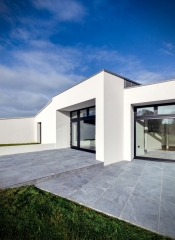 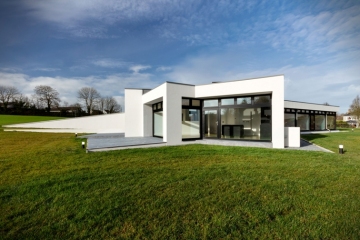 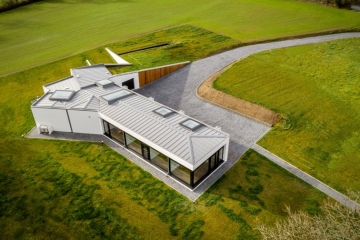 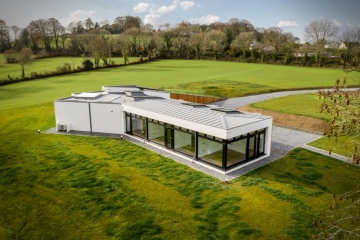